The five steps of DDMRP

In my last blog post we took a look at DDMRP as a concept and the ideas behind it. In this blog we will examine the five steps that define DDMRP.

Not all parts are buffered, most parts will still be planned with ordinary MRP logic also when DDMRP is used. The following is not a detailed description of all steps. The purpose is more to explain the mechanics of DDMRP – what it does and how it helps.

The first step of the DDMRP process is to define which parts that should be buffered. It is a critical step that if done right is the foundation for a successful implementation. Which are the factors that determine which parts to buffer? One way to look at this is to consider to what extent the buffer can:

It is typically not just one of the factors above that decide if a part should be buffered or not. It’s the complete picture that tells us who the best candidates are. Strategic inventory positioning is an iterative process. You will find some obvious candidates that will make a significant difference and decide to buffer them. New unprotected lead-times are calculated, and the next level of candidates will surface and so on. A fourth reason to buffer could be that we want to provide extra protection to avoid component shortages in front of a bottleneck resource. Such shortages will constrain the total flow or velocity. 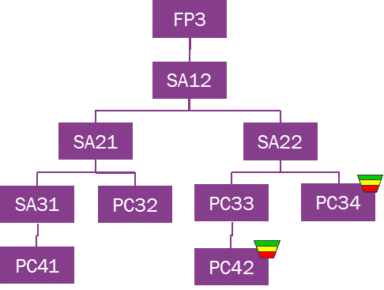 Using the above criteria our next question is how far we should go. There is probably no obvious answer, but some of the factors to consider are:

My recommendation is to gradually implement DDMRP buffers. Start with the obvious ones, begin to understand the dynamics of buffers and gradually expand and roll out DDMRP.

When the decision has been made to establish a buffer for a part, the buffer levels are calculated. The buffer is divided into zones with different purposes.

All parts belong to a lead-time category as well as a variability category by part type (Purchased, Manufactured etc.). The categories can be manually assigned or are assigned automatically using values for lead-time and coefficient of variability. Each type of category holds several factors that are used when the buffer levels are calculated. 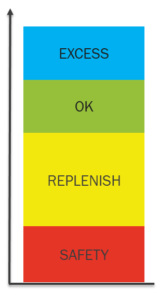 The calculation of buffer levels is a critical decision that will determine the buffers ability to function as intended. The purpose of the red zone is to cover for supply and demand variation during the buffer replenishment cycle. The recommended size will be different based on which type of part it is, which lead-time category it belongs to, the actual lead-time and the variability category.

The red zone is calculated as the sum of two components:

The red zone will grow with ULT, ADU and variability, but it is also noticeable that the lead-time factor is typically smaller for longer ULT. The reason is that the relative variability decreases as lead-time increases. This can be compared with the most commonly used way to calculate statistical safety stocks where the recommended level grows in proportion to the square root of the lead-time.

The yellow zone will provide availability during the replenishment cycle and is calculated as ADU multiplied by ULT.

The system will determine the order quantity by placing an order that takes us to the top of green. It means that the bigger the green zone, the longer the order cycle. We have three options,

The largest value of the three above will be used to calculate the green zone.

The ULT has a big impact on the red and the yellow zone. Since a new buffer will shorten the ULT for all consumers it means that any downstream buffers will shrink – and the higher the number of consumers the higher the impact will be.

Besides lead-times the ADU will also have a significant impact on the buffer levels. While DDMRP buffers are robust and designed to absorb variability, there are still situations where it is beneficial to dynamically adjust the buffer levels in line with known variation of demand. The underlying factors vary by industry and company, but some examples are:

The decision to trigger a replenishment order or not for a DDMRP buffer is by using the net flow equation: 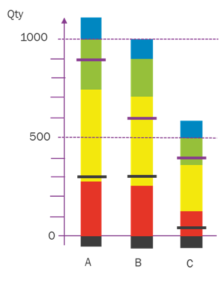 Qualified sales order demand is calculated as the sum of orders due today or earlier plus any qualified spikes. The spikes are used to capture exceptional demands that may threaten the integrity of the buffer. A spike is the cumulated quantity for a day detected in relation to a threshold typically defined as a percentage of the red zone. 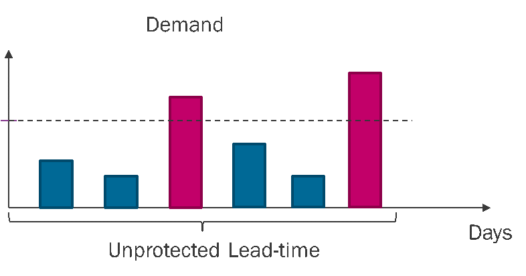 Spikes are not allowed to consume from the buffer since it would jeopardize the buffers ability to function and protect all other parts that rely on the ULT provided by the buffer.

An interesting feature of DDMRP is a separate buffer execution status used during the lifespan of the supply order. MRP relies on due dates, which has two major drawbacks. First there is no priority within a due date, second while the priority will change over time the due date will not. Let’s say you have placed a PO with a supplier including three lines, all with the same due date. Now your supplier asks which of the parts is most important to you. There’s no easy way to say, instead it comes down to often subjective and unstructured decision making.

DDMRP will calculate a buffer execution status that represents the decoupling points remaining opportunity to maintain its integrity, or put in other words, how far the buffer is from shortage.

The buffer execution status is not using the net flow equation, instead it is solely based on current stock in relation to the red zone. Typically, the values below are used: 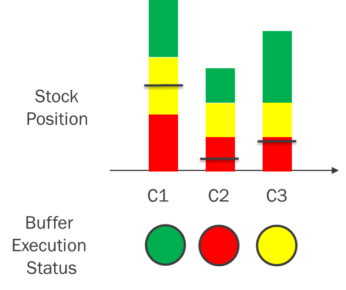 In addition to the status a numerical priority is calculated as the percentage of the red zone on-hand. The buffer execution status and the priorities are a great tool to help planners define the best sequence that will minimize shortages and maintain customer service.

This was a very hands-on description of how DDMRP works. In my next blog post about DDMRP we will look at the big picture. What is the context DDMRP works within, which are the most important benefits and are there any other ways to accomplish what DDMRP does?

Jakob Bjorklund holds a master of science in industrial engineering and management from the University of Linköping. In his 21 years with IFS, he has been involved with consulting, sales and marketing, and product strategy for process manufacturing and supply…