Teamwork, respect, enjoyment, discipline and sportsmanship: values of rugby teams, yes, but also values which should form the foundation of any business. The past few weeks have seen rugby fans the world over avidly following and analyzing all the action from the Rugby World Cup. However, business leaders could also learn a thing or two by scrutinizing the nature of the sport.

Rugby teams, like businesses, are all about the players (employees) and coaches (managers). From developing individual skills to uniting core talent to form successful teams or organizations there are key lessons business can learn from Rugby Union:

I along with many other Scots was shocked and devastated to witness our team’s early departure from the Rugby World Cup. It must be admitted, though, that the Japanese team delivered another electrifying performance, including securing 78% possession during the first half and playing with a new and refreshing approach to this wonderful game. Scotland didn’t play poorly, far from it, but the level of teamwork and individual skill from Japan came as a surprise and disrupted Scotland’s tried and tested strategy.

The response? Coach Gregor Townsend took the calculated risk of bringing on five new players – almost his entire subs bench – for the last half hour. For Scotland, the game took a dramatic turn for the better. Business leaders, take note: challenging the status quo and making adaptations to your current approach and processes can deliver results. Challenge the norm!

A business is a team, not a bunch of components working together

Achieving success – either through a group of athletes running around a pitch, professionals in an office, or out in the field – is about embracing unique skills within the construct of a team. Individual strengths/weaknesses must be acknowledged, and in addition to working one-to-one to develop/improve these, business leaders must also work out how to harness these in order to help the whole team over-perform. 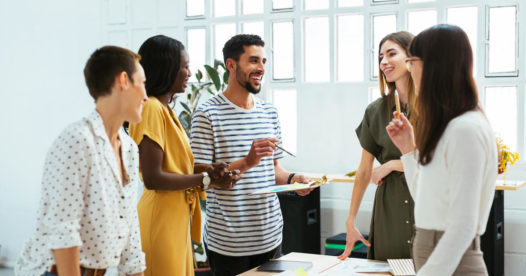 Graham Henry, coach of New Zealand’s All Blacks in the early-to-mid nineties, turned around his squad’s fortune by taking this approach. He developed a nutrition and training plan that was highly personalized to each player involving elements like conflict management, taking responsibility and self-awareness. It helped that he had a group of players who were truly world-class but had, until then, underachieved when the times got tough.

Last, but not least, perhaps the most enduring business lesson of all: expect the unexpected, build flexibility into your training regime and game plan so you can react quickly.

Japan had played a style of rugby unseen before and that was totally unexpected. However. Their defeat of Ireland should have been a wake-up call for Scotland. Unfortunately, they simply stuck to their tried and tested formula. Some of my friends have some insight into the game; their view on how to beat Japan is simple – keep it tight for 60 minutes, drain them of energy and possession then hit them in the last quarter when they are tired. Scotland, like every team or business, needs to observe the prevailing conditions and opponents and change their approach accordingly.

A couple of weeks ago, only those who speak Filipino will have been familiar with the word ‘Hagibis’. Then, it suddenly emerged as a name that struck fear into rugby fans, World Cup organizers, and everyone in its path. The typhoon which struck Japan resulted in the cancellation of three games and (due to a two-point deduction for each side), the exit of Namibia, Canada and Italy from the tournament without contesting their final pool stage games.

In a similar vein, opinion will remain divided as to whether the organizing committee could have made and delivered a different contingency strategy for Hagibis. Whatever your opinion, it can’t be denied that while Hagibis may not have been expected, the tail-end of Japan’s typhoon season definitely was.

Planning for multiple eventualities and possibilities is a crucial part of leading a team and running a business. This is where technology comes in. While we mere humans might struggle with plugging in a huge number of variables and forecasting a vast number of potential scenarios, this is exactly what our customers need to do and something we help them with through the provision of an outstanding ERP solution. A shame I didn’t think of offering an adapted version to Scotland! As IFS’s managing director for UK and Ireland, Alan Laing is responsible for driving significant growth across the regional business for all of IFS’s products, services and channels. Having spent more than 25 years in the technology industry, Alan brings…