Availability and reliability are key if military forces are to reach their objectives. But to achieve this, military forces and those supporting them are increasingly having to battle to stay on top on three fronts – procurement and support tactics, political changes across the globe and technical developments – to maintain their effectiveness.

Shifts in any of these three areas can be the difference between mission success and failure.

Tactics – In-service support risk moves away from the military

From buying equipment with a repository of spares to full capability being provided by an OEM or third party, it’s fair to say the support of military assets has moved forward in recent years. The service-based model, stemming from successful outsourced maintenance contracts in the commercial sector, is now becoming commonplace in defense. Alongside this has come the development of health usage monitoring systems (HUMS) on newer military equipment, such as the autonomic logistics information system (ALIS) on the F-35 joint strike fighter.

We are witnessing and will see a rising trend in 2018 among our own defense customers of moving risk as far as possible to in-service support providers. 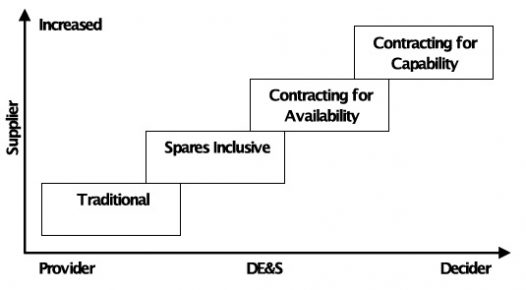 The trend is to move movement towards the top step of the staircase, or ‘contracting for capability’ thereby moving risk towards in-service support providers. In this scenario, the OEM owns and maintains the asset and the defense organization pays via a lease model. IFS expects to see a steady progression to these kinds of models as contracts and programs renew and advance through 2018.

Defense organizations cannot control the political environments they operate within – something which can have knock-on effects on the operations of a fighting force as well as the providers supporting them. One of the biggest political developments in recent years is the change in stability of the US, NATO and European Union dynamic.

The US has strongly recommended changes to NATO defense spending in the last 12 months, and the EU has witnessed some unexpected partnerships in equipment manufacturing. Change is already happening.

BAE Systems in the UK signed an agreement with Turkey Aerospace Industries to collaborate on a development program for the TAI TFX, a new twin-engine aerial superiority jet, set to be introduced in 2023. Elsewhere in the EU, France and Germany announced plans to work together on a project to produce unmanned fighter jets that will eventually replace French-made Rafale Jets and the Eurofighter Typhoon.

To protect their business and remain competitive, in-service support providers must be able to service all these strategies, which means satisfying a complex and changing network of stakeholders. As defense spending continues to divide opinion and new equipment development programs evolve, expect through 2018 the buying map and support structure in defense to move towards a different, and increasingly complicated model. As explained here, this has already begun, and will only increase in 2018.

Something defense organizations and in-service support providers will both eye in 2018 is the increasing prevalence of cloud-based IT solutions. As with other infrastructure technology, there has been natural conservatism around cloud computing in the defense environment, with concerns around cyber-security, data assurance and export control.

On cyber-security and data assurance, military organizations have been reluctant to store critical information in the cloud. If the server is held off-site or by a commercial company, defense forces must be sure it cannot be accessed by unauthorized personnel. Export control is another interesting dilemma – with many organizations crossing international boundaries, they are bound by the frameworks of each country they operate in.

The US DOD has weighed up its options with cloud computing and realized its benefits can be achieved with the right level of safety and security. In 2017, IBM announced it was working with the US Army to build and manage a secure private cloud data center. The DoD has also begun discussions with commercial technology leaders around updating the rulebook that governs its security demands for firms that have provided it with cloud computing services.

In 2018, expect to see other countries and organizations follow suit and adopt cloud solutions, but only those that meet strict regulatory frameworks in countries of operation, while also providing the suitable level of security, be that a commercial or private offering.

The in-service support sector is set on a course of change, and in some cases, as I have explained, uncertainty. Providers must make sure they remain at the forefront of tactical, political and technical change to remain competitive in 2018 and beyond.

Do you have questions or comments about any of the 2018 defense industry trends? Evan is responsible for ensuring that the products and services offered by IFS meet the needs of defense customers around the globe. Evan’s history and knowledge of the IFS Maintenix product offering date back to 2001-2011 when he occupied various…