Are chimpanzees more intelligent than computers?

Few would argue that Artificial Intelligence (AI) is the industry’s current hot topic. And why shouldn’t it be? AI’s potential is huge, but I’ve never seen a technology trend get hyped so much despite so many people failing to understand what it truly is, how it works, what’s possible today, what’s not and the impact it could have.

In this series of blog posts, I will be sharing some thoughts on the current mega-trend that is “AI,” to help you assess and understand what it is and the impact it will have on business applications.

Let’s start by clarifying what AI actually is.

What does AI mean?

The Oxford Dictionary explains “artificial intelligence” as “the theory and development of computer systems able to perform tasks normally requiring human intelligence.” That’s pretty clear, but it does beg the question: what is ‘human intelligence’ and how should that be used as a benchmark for how computers operate?

In its crudest definition, again from The Oxford Dictionary, the broader term of “intelligence” is explained as “the ability to acquire and apply knowledge and skills.”

John McCarthy, who is widely recognized as the founding father of AI from his work in the 1950s, focused on the science and engineering of making intelligent machines. And interestingly it was those machines he talked about as having “the ability to acquire and apply knowledge and skills.”

The process of having a machine acquire and apply knowledge and skills is relatively straightforward. No context is needed, no thinking is needed — it’s a case of providing data and instructions. But according to the textbook definitions that is ‘intelligent.’

So, this is where the nuance of the ‘human’ element comes in.

The element of human intelligence

Human intelligence, a term that is sometimes referred to as general intelligence or ‘the G factor,’ recognizes that “the ability to acquire and apply knowledge and skills” can be positively correlated across different tasks. In normal speak, it means that what you learn doing task A can have a positive impact on your ability to acquire and apply knowledge and skills to task B. It comes naturally to humans, and many of us don’t cognitively know it’s always happening, but it’s ingrained into the way we learn.

So, the challenge for artificial intelligence is not defining the task A and Bs and having a computer leverage the data, but rather enabling a computer to know when to, and also be able to, make correlations between different tasks in order to improve.

To explain this distinction in a real-world example, let’s talk lemurs and chimpanzees! 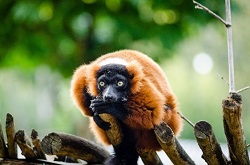 This family of lemurs gets fed every day at the same time. Unfortunately, several seagulls are often found around the zoo. These seagulls tend to swoop in and steal the lemurs’ food. To counter this, the zookeepers introduced transparent plastic boxes with tubes in the side which would just fit a lemur claw: the perfect solution, you would think. Impossible for the seagulls to steal the food of the lemurs. Now, the challenge: the lemurs didn’t get it. They were unable to figure out how to get the food. The zookeepers had to work with the lemurs for several weeks to train them, showing how to do it (building up a reference data set) before the lemurs could get the food out. Is this intelligence? Perhaps after all the lemurs were able to acquire and apply the skills on how to get their food.

Now, instead of the lemurs, let’s just take a bunch of chimpanzees and let them loose in the area with the boxes of food. Does anyone want to bet against the chimpanzees that they would solve it in less than a day? Less than an hour? And that they would surely do so without the need for a human to show them how. Is this intelligence? Definitely.Their ability to acquire and apply knowledge and skills in order to get the food is much faster because they are able to look at the problem, and based on other skills, tools, knowledge and context, resolve it easily.

This might be what the future of AI is all about

Although oversimplified, in my opinion, this is an example of the difference between being trained to do something and general intelligence. Being trained is based on a fixed set of rules within a narrow and specific context – this is seen in many computer systems today and is called “AI.” By applying learning, AI can acquire new insights in data sets and find patterns or correlations based on machine learning to resolve a problem. This is a very purpose-specific, very applied intelligence.

General intelligence, as shown by the chimpanzees, is much rarer, and although this might be what the future of AI is all about, it still has a very long way to go.

Do you have questions or comments about AI?