A diverse workforce is particularly important today when the problems businesses have to solve are increasing in complexity.

“When you bring together people with different perspectives, they have a different way of looking at things,” said Cindy Jaudon, president of IFS Americas. She was one of the panelists during a thought leadership breakfast meeting held at IFS World Conference in Boston on Tuesday. The topic of the well-attended inaugural meeting was Women in Leadership and the panel consisted of IFS women at various stages of their careers as well as a Harvard professor.

Jacqueline Wong, product solution manager at IFS, agreed with Jaudon, pointing out problem-solving and design capabilities require creativity. “One of the most important factors for creativity is diversity in terms of a team’s education and background and the different ways in which they approach a problem,” she said. 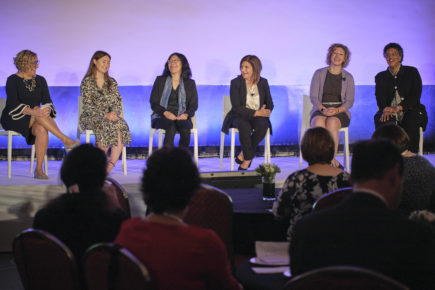 Create a “Waterfall of Talent”

When Jaudon first joined IFS over 15 years ago, the C-suite was “a group of middle-aged white men from Europe,” she recalled, but a lot has changed over the years. Jane Keith, CHRO at IFS, who chaired the panel, shared some stats about the current male/female split at IFS. The company employs 34 percent women versus the technology industry average of 23 percent. In Sri Lanka, where about one-third of IFS staff work, 40 percent of employees are women.

Marne Martin, CEO of Workwave and president of the service management global business unit at IFS, talked about the demographics at Workwave, which IFS acquired in November 2017. “We have approximately 50 percent women all the ways through the levels – the C-suite, VPs, and managerial.”

She encouraged the audience to really focus on creating what she called “a waterfall of talent” throughout their organizations, so encouraging women into taking on technical, expert, and managerial roles. As Martin noted, if a company lacks women at the VP level, it’s going to be hard for the organization to then bring more females into the C-suite. 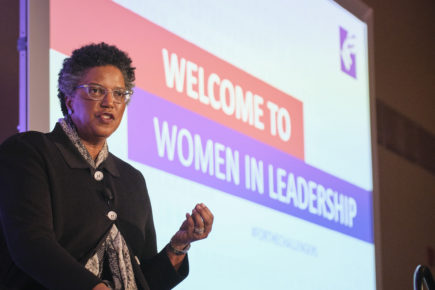 The Need for Role Models and Mentors

Both Jaudon and Martin talked about the vital need for women to have role models, something they didn’t have when they each began their careers in technology.

Zoe Leach-Leeson, GCO communications officer at IFS, who joined the company six months ago, said she has found the technology industry to be “much more welcoming” today with plenty of female role models. She also voiced her appreciation for managers who are open to “prioritizing taking a risk and an employee’s potential over finding someone who’s the right fit.”

Keith mentioned her approach to hiring and her willingness to take on employees who may not be a 100 percent fit from the get-go, but as a 50-percent fit can stretch and grow into the role. “One of my biggest challenges is to encourage management to give people that extra step and to take that risk,” she said.

Mentors can prove very helpful in nurturing young talent, according to the panelists, but it’s important that the mentorship is a good fit for both individuals and that each person can learn from each other.

“It’s really about both sides appreciating that there’s some reciprocity,” said Linda Hill, Wallace Brett Donham Professor of Business Administration at Harvard Business School, the only non-IFS panelist. She gave an example of reverse mentorship where she had her doctoral students run a workshop for NASA on how to become more innovative and attract more young people instead of herself. “I was betting on their potential, I knew they would deliver,” she said. 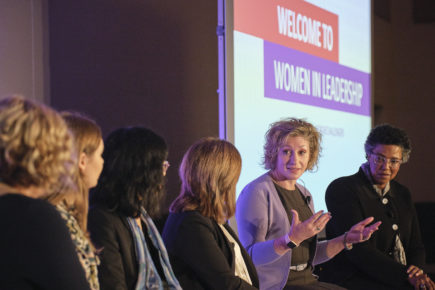 One of the questions from the audience to the panel was about which skills they identified as particular strengths for women in leadership. Along with empathy and resilience, was also the ability to work together well as a team.

The panel also talked about unconscious bias and how to avoid it. “We need to be aware who are the employees we’re featuring on our website, the language we use in job listings, and to have diversity in our interview panels,” Martin said. She laid out “three parallel traits” that employers assess when evaluating a potential hiree – “skills versus confidence versus potential.” There’s a need at many organizations to create a culture where women no longer lack confidence in accepting a position where there may be a gap between their current skills portfolio and what the job entails.

Professor Hill has done a good deal of research on both leadership and innovation. “One thing I really worry about is that too many people think that leaders are born and not made,” she said. “What we know is based on what we get to do. If you don’t get those assignments, how will you learn what you need to be a star?”

Hill mentioned a colleague’s recent research on interview times. While male candidates tended to talk about their achievements from the start of the interview, that wasn’t the case for female interviewees. However, when researchers extended the interview time from 20 to 30 minutes, within that final 10 minutes was typically when female candidates “began to brag” about their accomplishments. By making these kind of “microbehaviors” to established processes, companies can make real change and end up with a more diverse workforce. Currently a freelance content writer, China has written about why businesses choose and how they use enterprise software since the late 1990s. Her career as an ERP industry analyst and as a technology journalist has taken her around the world…