Seeing is believing. In the technology world, it’s easy to get caught up on what’s to come while the actual innovations take their time to reach the market. But at IFS World Conference, taking place this week in Boston, attendees don’t have to tax their imaginations to envision how artificial intelligence (AI), augmented reality (AR) or Internet of Things solutions will work.

That’s because when you walk into the main exhibit hall, you can see real-world examples of these technologies in action. The demos are of intelligent and autonomous solutions currently being used or tested in industries such as aerospace and defense, manufacturing, service and maintenance, and energy, utilities and resources.

In the manufacturing area, you will find a demo of robots carrying materials from one place to another on a factory floor. The robots receive instructions from the IFS ERP solution, IFS Applications, on where to make the pickups and the drop-offs.

The robots move autonomously, but without the instructions from the IFS system, they wouldn’t know where to go. “That’s what makes this different,” said Alex Ivkovic, Director of IT at CDF Corporation. “IFS is really orchestrating the whole thing.” Not only does the ERP system send instructions to the robot, but it also keeps track of when materials need to be replenished at pickup stations.

The robots have been in operation at a Cheer Pack North America West Bridgewater, MA, factory for about three months. Cheer Pack, a CDF subsidiary, makes sprouted pouches for baby food. Ivkovic said the company invest $500,000 in the robots and expects a yearly savings of $1.5 million from using them. 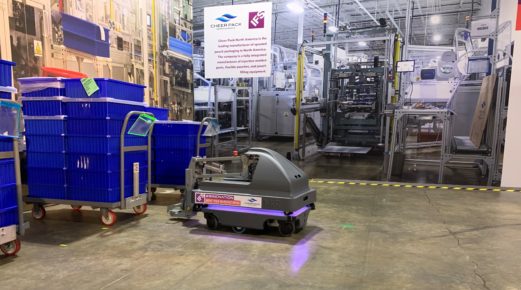 One of the Cheer Pack North America robots, “Marvin,” stole the show at a morning session on the event’s main stage. It was used by IFS’ Anna Sarbring for a demonstration of remote maintenance. In the demo, Marvin’s lifting arm malfunctioned, and Sarbring connected by video with a remote technician to make the repair. With Sarbring pointing the camera at Marvin, the remote technician instructed her on removing Marvin’s cover, which showed that a cable was disconnected.

The technician didn’t know where the cable was supposed to be plugged in, so he called up a PDF on the screen with an image of the robot’s guts, including the cable connections. Sarbring used the PDF to figure out where the cable goes and complete the repair. 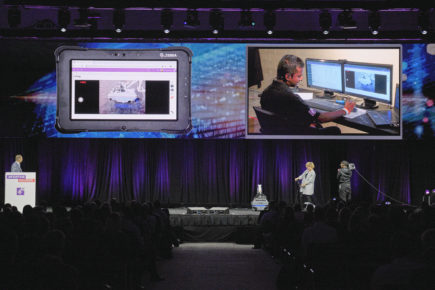 In another demonstration of remote maintenance, Sarbring and other IFS team members troubleshot an IoT sensor attached to the “front door” of an elderly person’s house. The sensor by Tunstall, which makes connected products for healthcare, was showing the door was closed when it was open and vice versa. It sent a signal to a backoffice, from which a technician connected with someone on site to perform the repair. The process was similar to that of the Marvin repair.

In the aerospace and defense section, a demonstration involved the use of digital twins by Test-Fuchs, a maker of aerospace testing systems, to monitor and test the performance of aircraft components. A digital twin consists of a 3D representation of a specific part.

In this case, the part was a pump used in rockets. A ruggedized testing device is connected to the pump to capture data and send it to IFS applications at a different site. A screen on the remote location shows a digital twin of the pump. The goal of the test was to measure how much resistance there was between the pump’s components as they held together. Data is captured and used to predict when the resistance will fall below acceptable levels so that the part can be serviced before causing a problem.

A demonstration in the energy and utilities section involves the use of a hololens, which consists of a pair of smart eyeglasses used to perform tasks. In this case, the task was to replace a malfunctioning card inside a cabinet that is part of an internet relay system.

Using the hololens, you can see the equipment in front of you while additional data is projected to the smart glasses with instructions on what to do. Following the instructions, a volunteer was able to remove the faulty card and replace it. 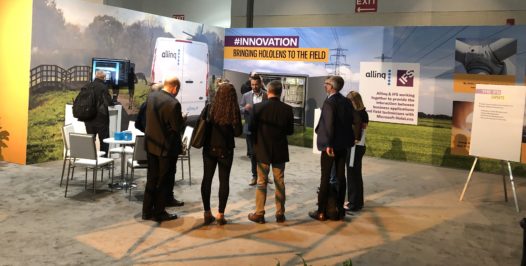 Pedro Pereira is a freelance writer based in Massachusetts with more than two decades of experience covering and analyzing the IT channel and technology. Currently, he focuses on security, IoT, cloud and artificial intelligence.